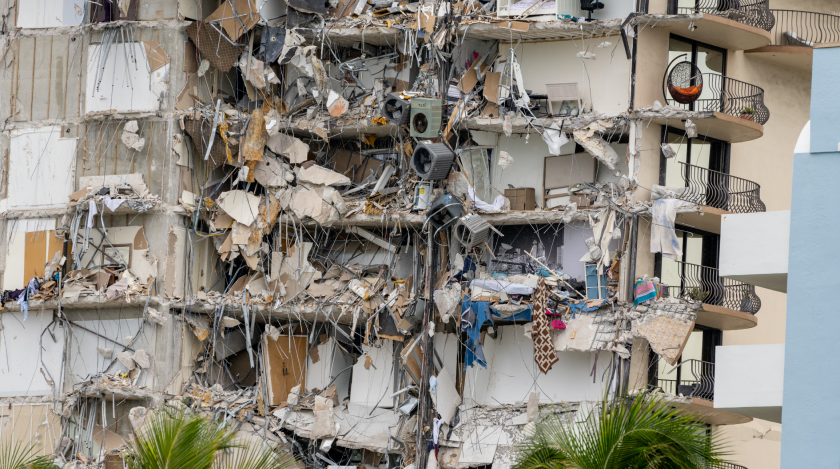 Hanif Kara, Professor of the Practice of Architectural Technology at the Harvard Graduate School of Design

The collapse of the Champlain Towers South in Surfside, Florida, just over a year ago, claimed the lives of 98 innocent people. Hoping to learn the causes of the fatal failure, the National Institute of Standards and Technology (NIST) began an investigation shortly after the catastrophe. In June 2022, it announced the next inquiry phase, intensive tests of the materials gathered from the disaster site.

The NIST investigation is similar to that conducted by the National Transportation Safety Board (NTSB) after the pedestrian bridge failure near Florida International University.

The ultimate goal of post-incident investigations is to make life-saving recommendations to policymakers and all related industries, so improved infrastructure design, construction, and maintenance help prevent future disasters and loss of life.

The Transportation Safety Board's illustrated bridge collapse summary shows the central role of preserving the remains of a disaster in this process.

What appears to be tragic chaos to the untrained eye is often the evidence experts rely on to answer how a building, bridge, or levee failed.

Emergency managers continue to save lives long after a collapse

Of course, the top priority for emergency managers and responders will always be saving victims' lives while ensuring personnel safety. Structural disasters have been less frequent than natural emergencies, so it's good to remember key components of post-incident investigations.

What evidence matters the most?

NIST describes the types of evidence its teams gather:

"Evidence can include pieces of buildings, building design and construction documents, security camera footage, eyewitness accounts, and data submitted by the public, among other materials. In the World Trade Center (WTC) investigation, the NIST team developed a database of more than 700 evacuation accounts from the media and conducted more than 1,200 interviews with survivors and first responders."

"In the case of the Champlain Towers South collapse, there are hours of interviews and footage to review, 40 years of building design and maintenance records to study closely, and hundreds of tagged evidentiary debris (floor slabs, columns, and beams) to characterize. The early stages of building investigations are like solving a massive jigsaw puzzle, where various clues are pieced together to identify the original location of every component extracted from the collapse."

Documentation of response and recovery actions can also be invaluable for investigators. Completed FEMA National Urban Search and Rescue reports may also help to recreate the original collapse configuration if response required moving any debris.

What kind of scientists will examine collapse evidence?

Knowing the broad array of scientific disciplines involved in a forensic investigation can help understand why managers protect certain materials that seem unimportant but will likely be collected when specialized teams arrive onsite.

A NIST forensic investigation may involve the following areas:

Managers and crews significantly impact potential infrastructure improvements by protecting disaster site integrity through access control. Collaborating with law enforcement and other partners, they quickly establish and enforce site perimeters, ultimately determining who has access to the collapsed structures.

For large-scale disasters, managers may use the Crisis Event Response and Recovery Access (CERRA) Framework.

In structural failures, they often approve entry only for those required for response and rescue or public works, usually trained to treat these disaster sites with a high degree of sensitivity to scene integrity.

Without this careful control by the managers, it would be much more difficult for experts to learn what happened. Information that could lead to building code, design, or construction improvement could be lost.

Advanced incident accountability technology, such as verified digital credentials, give incident commanders, staff, and chiefs the ability to control who is near the failed structure.

The ability to dynamically grant or suspend access in these volatile and fluid locations can save the lives of responders, volunteers, and victims. It also increases evidence preservation by automatically restricting access to those with appropriate training.