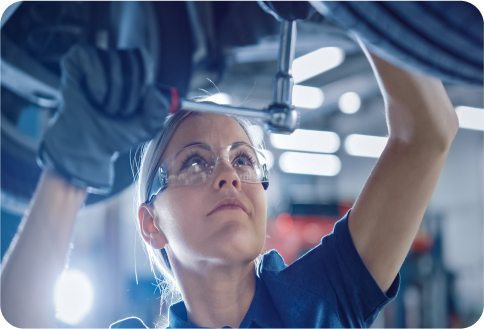 Apprenticeships can be the key to getting people back to work faster, even in times of higher unemployment. But there’s a critical need to improve the process of connecting people with the right programs that will advance their careers and align them with the evolving job market.

With the right technology, states can improve existing programs, help bring more apprenticeships to market, and drive public interest in those opportunities.

How states, employers, and workers benefit from apprenticeships

State workforce development agencies are working hard to connect their unemployed constituents with jobs (in November 2020, there were 6.5 million job openings nationwide). But some industries have been hit harder than others by the COVID-driven recession. Employment experts say apprenticeships can be a pathway to get many people back into the workforce while acquiring the skills that employers need.

Businesses benefit from apprenticeships because they can train workers to industry and company standards, which can be tremendously valuable. Every $1 that employers invest in apprenticeship programs brings them an average of $1.47 in returns.

“Apprenticeship is all about a progressive scale of wages…. The whole idea is to provide labor protections to the apprentice so that they're not treated as a cheap source of low, skilled labor. But ... it really is an opportunity to develop talent from the ground floor into a fully qualified worker. The sort of discount you get in paying an apprentice less than you would pay a fully qualified worker is a reflection of the fact that you are also investing in their training and that you also have other workers that are invested in mentoring that apprentice.”

Workers meanwhile benefit from apprenticeships because they get paid to learn in-demand skills, removing the economic barriers posed by traditional schooling and unpaid internships.

Furthermore, the federal government and many states are working to increase apprenticeship enrollment among underrepresented populations, including women and minorities, to ensure they also have access to these higher-paying jobs.

Although the pandemic has created challenges for apprenticeships, many programs have pivoted to provide training online. But more can be done to connect candidates with apprenticeships.

Merit surveyed 1,200 people in Iowa, Kansas, Nebraska, and Missouri in November and December 2020 to see what they think of apprenticeships. The answers reveal that many people aren’t aware of the value apprenticeships offer.

Of the respondents who completed an apprenticeship program (10%) or are currently enrolled in one (4.2%), the top 3 perceptions of apprenticeships are:

Respondents who are deciding on a career

The 2nd highest group of respondents (“mid-career” respondents were No. 1) in Merit’s survey was “considering career options/deciding on career” (18.8%). What do people who are deciding on a career think of apprenticeship programs?

Breaking through barriers of perception and implementation

Fortunately, there are ways for states to better support the creation of apprenticeship programs to help employers recruit, acquire, and retain skilled workers, while giving workers a clearer look at how apprenticeships could benefit them.

How can states help more businesses establish beneficial apprenticeship programs and connect them with the right candidates? Workforce agencies are a driving force in this process, but digitization can revolutionize the space, giving clearer visibility into regional needs so stakeholders can create more effective strategies.

Merit’s verified identity technology offers a way to compile crucial data points to show the gaps between employers’ needs and labor market shortages, and highlight equity disparities so they can be addressed. This information can also be used to help shape higher education curriculum and create targeted apprenticeship programs.

Meanwhile, states can give out-of-work constituents a clearer understanding of how an apprenticeship could serve them. States can use a platform like Merit to match people with relevant opportunities, including apprenticeships and ways to acquire stackable credentials, showing them a pathway to higher wages and a better career.

Verified identity technology can further capture workers’ skills and competencies earned during apprenticeships, streamline youth/pre-apprenticeships with registered apprenticeships, and give apprentices easier access to wraparound services and benefits to ensure they are successful.

Modernizing apprenticeship programs isn’t a new topic. But technology is evolving to make it easier for states to get people back to work faster, and keep the workforce agile enough to meet the ever-changing demands of the 21st century.