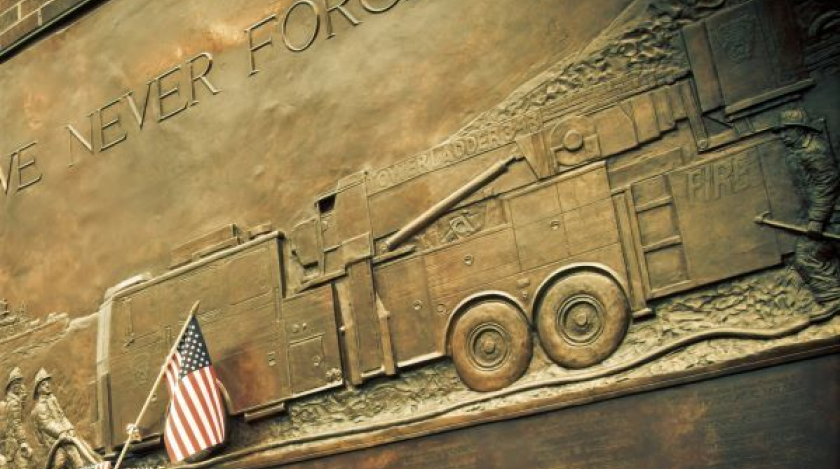 “We were a very close-knit Italian family,” Patricia Santora laughed. “Every night there were seven of us and my father would shout, ‘Everybody just shut up!’ My mother always asked, ‘Can’t we have one meal where we're not all yelling?’”

“My brother Christoper was the king of that castle." He had four sisters and a million-dollar smile. Everybody loved him - even though he liked the Toronto Blue Jays instead of the Yankees or the Mets.

At 23, Christopher Santora was the youngest member of the New York Fire Department. He was ecstatic with his assignment to Engine 54 in Manhattan and couldn’t wait for his first call. It came at last - on September 11, 2001.

Technically, it wasn’t “his call” because he was off-duty. Like many of the 343 firefighters who perished that day, Santora suited up and rushed to Ground Zero anyway. He was found the next morning near the rig, among the 1.8 million tons of debris surrounding the Twin Towers. They buried him from St. Rita’s Church in Queens, a faithful bagpiper playing for the “kid brother” of Battalion 9.

"We all promised never to forget them."

Next week, at the 2022 Fire Department Instructors’ Conference, a firefighter will pick up a replica of Christopher’s FDNY badge, clip it to their helmet, and start climbing 2,071 stairs in the Lucas Oil Stadium, Indianapolis. Crews from all over the country, most hauling 80 pounds of gear in uniform, will recreate something of those final heroic hours in the torrid World Trade Center stairwells. They keep a promise made 21 years ago, “We will never forget!”

When the two fully-fueled airplanes targeted the Lower Manhattan skyscrapers, 50% of the city’s units raced to the disaster. Civilians who got out before the Towers collapsed kept saying, “We were running down the stairs. They were going up into the nightmare.”

87% of people working in the Trade Centers survived because 343 FDNY crew members started that two-hour, 110-story climb. With police and port authority officers, they encouraged people to flee to the streets and directed those waiting for rescue to still-open stairs. Most of the firefighters who started the climb never returned.

The day after the attack, hundreds of firefighters, most injured and traumatized, were back at Ground Zero looking for survivors. When rescue turned into recovery, they were there.

"We worked in 24-hour shifts," one firefighter wept. "If we could have found one person, it would have been worth it. The fall ground everything to dust. In all the time I dug, the biggest piece of office equipment I found was a four-inch square keypad for a phone."

On the second anniversary of 9/11, Albuquerque Fire Department Lieutenant Charles Cogburn was serving in Parwan Province, Afghanistan. He dressed in body armor, strapped on an M4 oxygen tank, and climbed a two-story building 55 times in honor of his brothers who perished in the terrorist attack.

"I was struggling. Then I remembered what your son did and I finished the climb."

Since then, thousands of firefighters have organized similar memorial climbs, the largest sponsored by the National Fallen Firefighters Foundation. This year, the 2022 9/11 Memorial Climb begins on Friday, April 29th at 1 PM.

“I miss my son every single day,” said Maureen Santora, “ but I have no regrets because he always, his whole life, wanted to be a firefighter. He said February 20, 2001, was the greatest day because he was offered probationary employment with FDNY. It is still so difficult, but I know he is very much with us. Every time I ask him to find me a parking space, he does. Parking in the City is awful. He always finds me a space. My husband used to think I was crazy, but then he saw I was right. It's Christopher's way of letting me know he's still here.”

Santora's heroic sacrifice is not only honored by his family, friends, and the survivors he saved but firefighters across the country who wear his badge during the climbs. Many take time to visit Christoper’s tribute page on the NFFF website and leave messages for his loving family.

I wanted to let you know that it was my honor to participate in the 911 Stairclimb at Lambeau Field yesterday in Green Bay, WI. I climbed in honor of Christopher. I will always be grateful for his selflessness and bravery, and I pray for your family and friends! We will NEVER forget! Sending love!

I did a memorial stair climb today in St. Louis. I had the honor of climbing 110 stories for Chris. I announced his name and rang the bell in his honor upon completion. His name and honor will live on forever. Thank you for Christopher.

My wife, Sandy, and I noticed all flags at the 9/11 Ground Zero Memorial had names and a brief story about each person. One had Christopher, and the other was a Port Authority Officer. We were given Christophers’ flag and brought it to our Fire Department in Forest Park, Illinois. The Department now has Chris’ flag on display in their firehouse. It is with his brother and sister firefighters.